Spaghetti all carbonara is an incredibly delicious, classic Italian dish.

It’s very easy to make and you can whip some pasta carbonara up in less than 30 minutes.

You only need a few ingredients for the spaghetti carbonara recipe, but they’d need to be specific. Italians are very proud of their culinary history and that’s for a good reason!

Unfortunately, many Italian ingredients are difficult to find in certain areas outside Italy.

In order to prepare a tasty Italian dish, you’d have to compromise and replace some of them with their nearest equivalents.

That being said, in this dish you could replace the famous guanciale with some pancetta (bacon made from pork belly meat). The fattest one you can find!

Pecorino Romano shouldn’t be difficult to find, but just in case, you could replace it with Parmesan cheese.

There’s a big difference between the two: Pecorino is made with sheep milk, while Parmesan is made with cow milk.

They don’t taste the same, but in order to try out this recipe, it’s worth replacing the original ingredient with the next best thing.

Spaghetti carbonara is also prepared using fat that forms from the guanciale while cooking, and not olive oil.

Alternatively, you could add some fat (namely lard) in order to fry the pancetta (since pancetta isn’t as fatty fat fat as the guanciale).

And if you don’t have lard in your kitchen either, then go ahead and use a tablespoon of oil.

Here’s how to make spaghetti carbonara: 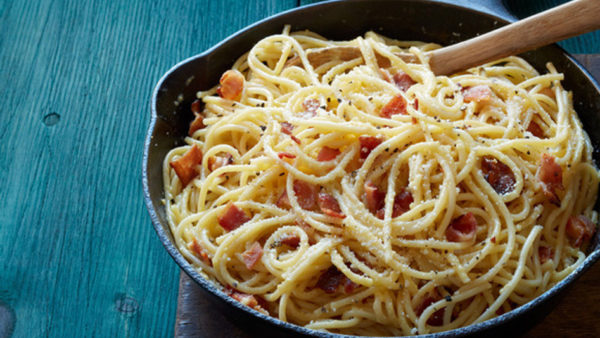 If you'd like to get in touch, e-mail me at office@adrywords.com

or connect with me on social media:

This website uses cookies to improve your experience while you navigate through the website. Out of these, the cookies that are categorized as necessary are stored on your browser as they are essential for the working of basic functionalities of the website. We also use third-party cookies that help us analyze and understand how you use this website. These cookies will be stored in your browser only with your consent. You also have the option to opt-out of these cookies. But opting out of some of these cookies may affect your browsing experience.
Necessary Always Enabled
Necessary cookies are absolutely essential for the website to function properly. This category only includes cookies that ensures basic functionalities and security features of the website. These cookies do not store any personal information.
Non-necessary
Any cookies that may not be particularly necessary for the website to function and is used specifically to collect user personal data via analytics, ads, other embedded contents are termed as non-necessary cookies. It is mandatory to procure user consent prior to running these cookies on your website.
SAVE & ACCEPT